10 Video Games To Play If You Love Dungeons & Dragons

It’s hard to overrate the influence of Dungeons & Dragons on video game industry. Though tabletop games now seem to form a subculture, back in the 1970s they were much more mainstream, and so the impact the video game industry early on its rise. And we don’t mean strictly digital version of the original D&D (despite their existence and popularity). The phenomenon of D&D Online had unexpected effects, like using electronic media for analog playing – for example, Skype.

Still, the gaming industry learned a lot from Dungeons & Dragons – both from the game with its complicated rules, and from its creative fans. There are numerous games influenced by D&D – in fact, most digital RPG’s. Still, there are some that come the closest to the original feel of Dungeons & Dragons, with its complicated rules, unexpected twists, and a fantasy setting with mythological inspiration. Let’s see the ten games we recommend to the fans!

In fact, it’s among the closest to the origin. Being based on one of the real D&D Campaign, it presents it in digital form, with as little distortion as possible. Though released in 2000, with expansion in 2001, it is still fun to play, just due to its almost intact D&D rules. The game is based on the ruleset of AD&D 2nd Edition.

So what should one expect from Icewind Dale? First of all, the familiar setting. The Forgotten Realms have become home for lots of games (including the famous Baldur’s Gate), as well as dozens of fantasy novels. Second, the rules are, in fact, adapting the tabletop mechanics to the digital environment, preserving as much as possible. They are quite complicated, but in video format, they are easier to master.

Finally, the game has a story, and it’s a good story, both in terms of narrative and writing. There are up to six player-generated characters on a trip through the unlearnt world, worth always much to tell. And there is a story behind each of them.

The game is now easier to find, due to re-release (or rather a remaster). It’s available for most gaming platforms. So it’s the perfect candidate to start your journey with.

It’s quite a paradox to put this game on the ninth place – or to mention it at all, if you wish. This game should be the default thought when you speak of video games similar to D&D: what can bear more similarity than this? It’s a well-known MMO, staying on the market for 14 years, and now it’s developed far from its initial condition.

This development has its downsides through the eye of the classics’ fan. The rules of D&D Online are very loosely based on its official version 3.5, so it’s in no way a digital version of the original; rather a remake. Leaving Forgotten Realms to the eponymous series, it borrows just a bit from this campaign, utilizing mostly ideas from the Eberron campaign.

Probably it’s a correct strategy not to copy all of the tabletop origins and offering a standalone like instead. Anyway, the game has been around for more than many other projects. And it’s popular enough to be free-to-play, monetized with microtransactions and available without any.

And here is another trip to Forgotten Realms, a classic title that has become the first digital D&D experience for generations. It’s one of the classical triads, along with Baldur’s Gate and the aforementioned Icewind Dale. Being based on the D&D 3 rules, it offers the great work of adapting them to digital reality.

There is no sense to make a D&D-based game without true multiplayer, and Neverwinter Nights is alright with that. It’s been greatly drawn and thought right from the beginning. If you want to revisit (or discover) it in 2019, we’d recommend a revamped version available now on Steam. Later in 2019, you’ll be able to purchase its console versions.

Finally, here comes a game not based on the original D&D universe, but rather inspired by it (and its digital incarnations, especially Baldur’s Gate). One of the features that should draw the most attention from D&D fans is its flexibility when it comes to multiplayer. It allows players to go through their adventures as a part of a greater narrative. It’s mostly based on local multiplayer, but it’s made easy to drop in and seamlessly incorporate a new player. There is even a special modding tool built-in, an analog to house rules that enrich most tabletop games that allow for that.

The characters of this game are so-called Source Hunters, specializing in locating and destroying malicious magical objects. On their quest, they travel through Rivellon, the location of the game, and even further. The travel will be full of combats (in a turn-based manner), discoveries, and unexpected interactions.

Don’t be fooled by the name. Despite it’s obviously inspired by the original Forgotten Realms, and its name and setting are obviously from there, the rules of the game are quite different (though the difference is not dramatic). It’s an MMORPG with quite an unusual approach; it offers an online story with a limited multiplayer and avoids the typical manner of thousands of players connected in the same location. Instead, it’s concentrated on the story, the interaction within a small group, and creativity.

Yes, it also has its tool for generating content. It’s not just an option, like a level editor in single-player games. Many quests require creative work to complete, and players get notified when (and where) these are available.

This game is free to play (that may mean “pay-to-win”) and available on most popular platforms, including PC, Xbox One, and PS4.

And again we witness the lasting influence of Baldur’s Gate, the game that we’ll hear of more. Though the game takes place in an independent universe, its mechanics can be compared to D&D. The game has been released for all current desktop platforms, including Linux (!), and all current generation consoles.

The story begins in a place named Dyrwood, suffering from a strange plague: kids are born soulless, with all ruining consequences of that. The plague should be stopped, and it takes special abilities to fight it. Luckily, here are the Watchers, ones able to contact the souls and to see the past through time. These abilities are great, but it takes more to find the origin of the plague and neutralize it. That’s what you are in for.

This setting implies a greatly developed world, with detailed graphics and just as detailed narrative. The backstory seems worth a series of novels, as well as Forgotten Realms. No wonder the game received a successful sequel and both are still loved and widely played.

Though the Star Wars setting is a trademark in its own rights, the game is influenced by D&D to a high extent too. Some even call it a D&D version with a Star Wars skin upon it. And yes, players learning the mechanics will find it more familiar by D&D than by other SW-based games. It features both good visuals and a narrative worth visiting a galaxy far far away, telling the story of Darth Revan that hasn’t made it to the original saga.

It’s considered one of the greatest games ever released by Bioware (in all its enormous catalog). The game is still available for Windows and the current (and the previous) Xbox generation. Yes, both installments are rather old; but heh, we’re here discussing the games inspired by 1970s’ classics! And it goes out equally to the original D&D and to A New Hope.

It was hard to avoid typos and not to insert Mustafar instead of Mystara after the previous one. This game of 2013 has nothing to do with Star Wars, but suddenly it has little to do with the original D&D gameplay – instead, it offers a new approach to the familiar setting.

There are little RPG elements in this game (though there are some). In fact, it’s a revamped combination of two arcades, namely Shadow over Mystara (1996) and even earlier Tower of Doom (1993). It’s set in the D&D universe, with familiar names, various classes, and inevitable multiplayer. The characters can level up and amplify their power, and the players can co-operate, combining various classes. If you don’t mind a lighter retro style, you’re welcome.

And this is one of the most famous video games based on Dungeons & Dragons. First of all, because Baldur’s Gate is one of those games that transferred the origin into a video game as thoroughly as possible. Based on the 2nd edition of D&D rules, it was released in 1998 and became an instant megahit. The sequel followed in 2000. Then there were some expansions and reissues, and now the third installment is in production. So far you can enjoy the game both on PC and on current generation consoles – Xbox One and PS4.

The story about an orphan hero you upgrade to a demi-god eventually is told in rich detail, and the visuals are still good, even 20 years after. But what impresses the most is the narrative. No wonder this universe combines books and games so organically. 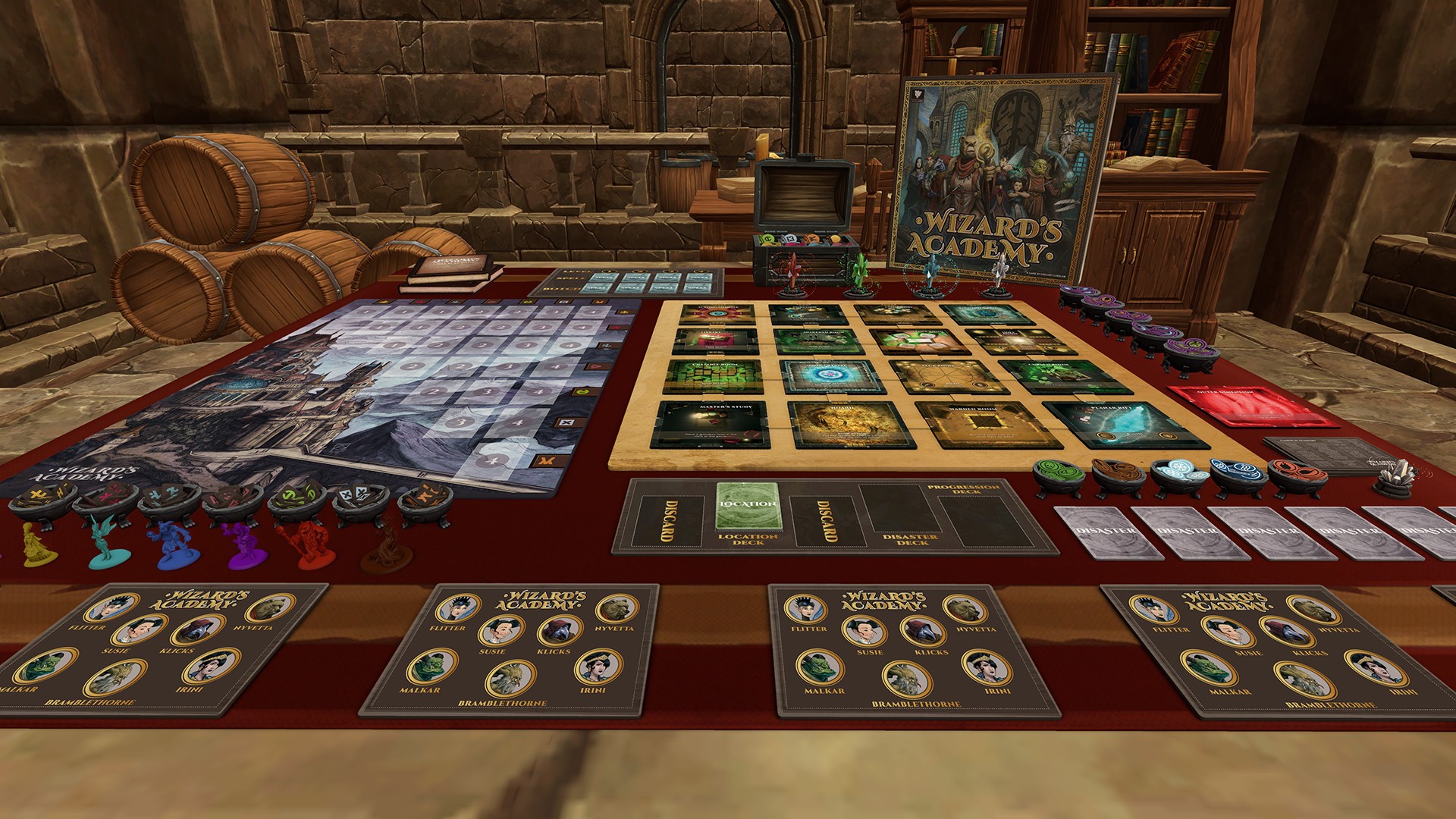 Well, Baldur’s Gate is the recognized classics and probably the best D&D-based video game ever. Can anything beat this? Yes, it can, if you are searching for something that fully recreates the tabletop experience. This one is a highly customizable digital tabletop, in fact – a sandbox environment for creating your own tabletop games digitally.

It will take some time to recreate the original D&D with it. On the other hand, it lets you design the table and the cards the way you want it, or create your custom cards, dice, and all the environmental elements. So if you are a house rules fan, that’s your paradise.